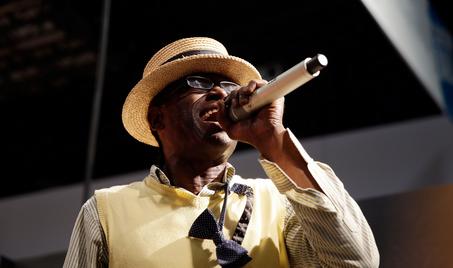 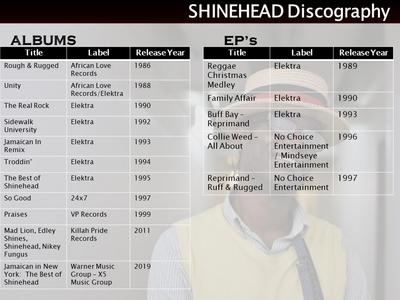 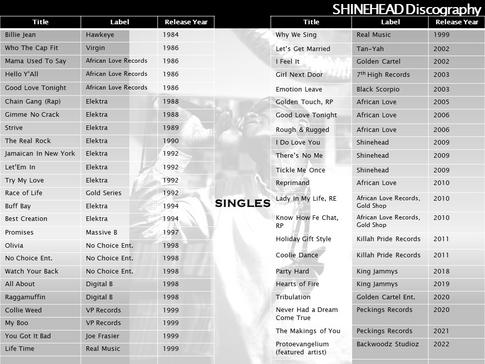 Boasting unparalleled artistry, Shinehead is an international entertainer with a storied career of more than 40 years. Shinehead's ultra-diverse style, which fuses the vibrant sounds of Reggae, Dancehall, Hip Hop and R&B, catapulted him to worldwide fame. A superstar by every definition, Shinehead, also known as Edmund Carl Aiken, Jr., has reached millions of fans and has inspired generations of artists since his early 80's debut.

Born in England and raised in Jamaica and New York, Shinehead rose to fame on some of the Empire State's finest Reggae and Dancehall sound systems, notably, Tony Screw and his famed, Bronx-based Downbeat The Ruler, and African Love. Surrounded by legends like Brigadier Jerry and Rankin Joe, tenure on the sound systems enabled Shinehead to flourish in Reggae Roots and Dancehall, in both lyrics and music knowledge. In fact, he procured a love of vinyl collecting from the likes of Tony Screw, African Love, and Kiddy Rankz of Firgo Digital.

Performing live on a sound system became second nature to Shinehead. Nevertheless, it was the skilled artist's transition to recorded music that would change his life and career forever. In 1984, Shinehead released his first single, an amazing cover of Michael Jackson's "Billie Jean," bringing him notoriety in and out of the dancehalls.  His formal debut "Who The Cap Fits (Let Them Wear It)" followed in 1986 on the African Love Music label (featured on the "Rough & Rugged" album).

Shinehead's Bronx residency also yielded a natural affinity to Hip Hop music - Reggae and Dancehall's progeny. The versatile entertainer was heavily influenced by Kool Herc in his development as an MC. Shinehead frequented Bboy Jams, especially those featuring Grand Master Flash and The Furious Five and Kool Herc and the Herculords. Shinehead was in awe, soaking in all of Hip Hop's exciting and raw musical elements.

Life and music were truly beginning to heat up for the rising star, culminating with an unprecedented contract for a "Reggae" artist at the time with Elektra Records from 1988-1995.  Signed by A&R Raul Roach - son of the legendary jazz musician Max Roach - Shinehead was a diamond in the rough, displaying a style and talent the labels had never seen before!  The international artist is credited as being one of the first Jamaican Reggae Dancehall acts to merge Hip Hop with Reggae music and sign to a U.S. label.

Shinehead's music catalogue is one to be rivaled. Whether one is inspired by the timeless and inspirational  "Strive" or grooving to "Know How Fi Chat," "Collie Weed" "Billie Jean," "Try My Love," "Chain Gang" or "Rough & Rugged," Shinehead's music permeates the mind, body and soul of fans. Much to his credit, the wildly innovative artist is known globally for his rendition of Sting's “Englishman in New York, retitled as "Jamaican In New York" on the "Sidewalk University" album (1993). It peaked at #30 on the UK Singles Chart in April 1993. Consequently, Shinehead was produced by the late Jam Master Jay of Run DMC on his Unity album.

Quite a music force,  Shinehead's "Chain Gang" was the first music video to air on the premiere episode of the cult classic show "Yo MTV Raps" in 1988. The music giant has broken barriers and opened doors, allowing Reggae music to have a respected place on mainstream, global platforms. From popular TV talk show performances, worldwide tours, and heavy radio & video rotation to international TV appearances, brand Shinehead (and all its music greatness) reached ubiquity.

Shinehead shows no signs of slowing down. The living legend has recorded independently with producers from throughout Jamaica, U.S., Europe and Japan. The "Strive" singer has worked with greats like King Jammy's and Steelie and Cleevie, who heavily influenced his production and arrangement abilities. Truly one of the most diversely talented artists to travel the music space in this lifetime, Shinehead is a humble giant, who quietly accepts his flowers. In 2020, a delivery was made. In a full circle moment, Shinehead was honored alongside Kool Herc on International Reggae Day 2020 for their unprecedented Caribbean contributions to Hip Hop culture.

The melodious sound of Shinehead is unwavering, as it "shines" through recent releases on the U.K. Peckings imprint, including the explosive Reggae Soul gems "Never Had a Dream Come True" and "The Makings of You." Shinehead proves he's got the "Golden Touch." Both songs are fan and DJ favorites, as they showcase Shinehead's pitch-perfect vocals over nostalgic riddims. Recently, the renowned singer dropped his first video in more than 20 years for "Never Had a Dream Come True," which is garnering wide audience support.

Truly a masterful performer, Shinehead's skill set is unyielding. The uber talent sings, raps, deejays, singjays, plays bass guitar, stand up bass, an electric bass, and a keyboard bass, songwrites, produces and even spins vinyl and acetate records, aka dubplates, on turntables for his own custom-built sound system called Kingston 12 HiFi, which he co-owns with partner DJ Papalotl aka Buttahfly. Kingston 12 HiFi has amassed impressive music festival and event performance dates over the years. The sound system has gained notoriety as a resident sound on Damian "Jr. Gong" Marley's popular "Welcome to Jamrock Reggae Cruise."  Fans can tune in to hear the sound's weekly, high energy "Sunday Reggae School" show on Kingston12Hifi.com. There, they can also find a treasure trove of music, videos, merchandise, mixes, livestreaming, upcoming performances and more.

As if Shinehead's entertainment portfolio couldn't get larger, he opened a new studio and event space with partner DJ Papalotl in downtown LA. Offering a broad range of services, the venue is quickly becoming a musical hot spot! When the music great is not busy recording new music, playing Kingston 12 HiFi or running his new studio, he is earning his stripes as "The Walking Dubplate" by recording dubplate customs and specials for sounds systems from all over the world. Shinehead's vocals graced the famed O2 Academy in Birmingham, UK via a riveting dubplate special in tribute to Garfield "Chin" Bourne of Irish and Chin for his historic final World Clash staging. Much to his credit, the voice of "The Walking Dubplate" is in demand for high profile sounds and clashes around the world!

Undoubtedly, ‘Poppa Shines’ has gracefully aged like fine vintage wine with a voice that gets better with time.